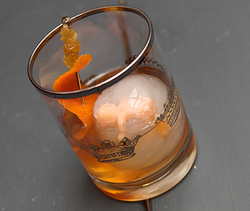 Place 1 (2 1/2-inch) ice cube in a rocks glass.
Add the rum, the bitters, and cinnamon syrup, and stir until well chilled.
Squeeze the orange peel over the drink, making sure the oils fall into the glass, then thread the peel,
along with the raisins, onto a cocktail pick. Place the pick in the drink and serve.

Recipe courtesy of Epicurious - full recipe can be found on Epicurious.com
Photo by Sara Bonisteel 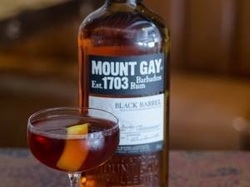 Stir ingredients with ice until well chilled and strain into a cocktail glass.

Garnish with an orange twist. 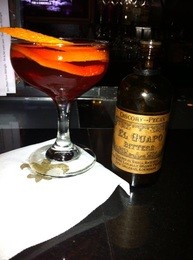 REMEMBER HER NAME
A recipe by Becca June Conklin at the Bourbon O. 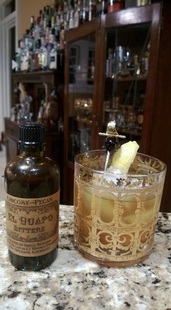 Drop a sugar cube in an old fashioned glass and soak completely with the bitters until they run off and puddle in the bottom of the glass. Add a splash of water and muddle until most of the sugar is dissolved. Add the citrus peel and lightly press with muddler to express the oils, but not so hard it breaks apart. Add the whiskey and a large cube of ice (or fill with normal sized cubes). Give it a stir and garnish with the cherry on a cocktail pick. 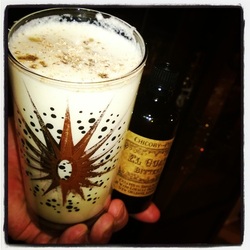 Beat egg yolks until they lighten in color (pale yellow) add sugar and beat until creamy and dissolved. Add milk, cream, bourbon, bitters, and nutmeg. Blend until well incorporated. In a separate bowl beat the egg whites and 2 tbsp sugar until stiff peaks form. Gradually whip the egg whites into the milky boozy mixture. Serve immediately with a little grated nutmeg and a dash or spritz of the bitters on top. 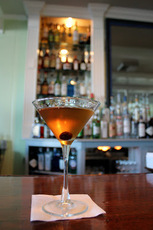 Add all ingredients to a mixing glass, fill with ice. Stir until well chilled.
Strain into a cocktail glass. Garnish with a Luxardo cherry.